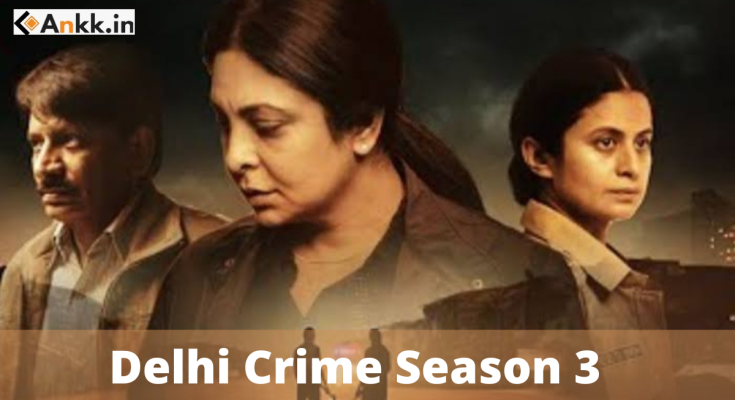 Delhi is the capital of India and also the hub for crime activities. Hundreds of crimes take place in Delhi every day, but one crime that has left the entire nation in shock was Nirbhaya Case. This case was precise, vividly and beautifully depicted in the Netflix series known as ” Delhi Crimes”. Delhi Crimes has two seasons and it’s the first season made this series won Emmy Awards in 2020. Delhi Crime became the first Indian series to get an Emmy award. Its Season 2 was recently aired.

Now there is huge speculation among its fans about whether the series is going to be renewed for Season 3 or not. Don’t worry we will try to answer all your questions.

The amazing fact about Delhi Crime is that there might be fictional characters in the series but the series is not at all fictional, it covers true stories.

Delhi Crime is a Netflix original series that was released in 2019, directed by Richie Mehta, and produced by Golden Karavan, Film Karavan, Ivanhoe Productions, and Poor Man’s Production, Radhesh More was the casting director. This series has two seasons, season one was based on the 2012 gang rape case that happened in Delhi.  While season 2 depicts the story of the kachcha-baniyan gang.

This series has a huge star cast but the faces are going to be back in season 3 might follows:

Season 2 of Delhi Crime was launched on Netflix on 26 August 2022 and is applauded everywhere and now its fans are eagerly waiting for season 2. Delhi Crime season 3 might come because the writer Sudhanshu Saria who has previously worked as a writer on the other season as well has said in an interview that season 3 of Delhi Crime will come, and the script writing for season 3 is done. So let’s wait for the official news.

Delhi Crime follows the life of Delhi Commissioner of Police Vartika Chaturvedi who is on the mission to find the suspects behind the rape case. The first season of Delhi Crime followed the situation after the rape case. The story of the series is based on the 2012 Nirbhaya case when a girl was travelling with her friend via a bus, and there were around 6 people on the bus including the driver, conductor, cleaner, etc. The girl was raped and beaten to death, and her friend was also brutally wounded, the people on the bus threw both the girl and her friend out of the bus, and the people around her saved her and got her to a hospital, and the girl ended up being dead, and the whole story of Delhi Crime is based on that crime that is still scary to even think about and will give you goosebumps.

Season 2 was launched on Netflix on 26 August 2022, at 12:30 p.m.IST worldwide and is already the talk of the town. It follows the story of the kachcha-baniyan gangs, who terrorised the homes of senior citizens in Delhi in the middle of the night. Their modus operandi involved breaking into rich households, and murdering the residents if they failed to comply. What’s interesting is that all members of the gang would be dressed in their underclothes — thus the affiliation name — and lather their bodies with oil, making it difficult to grasp them during a chase.

What is Going To Be Delhi Crime Season 3 Story?

The story of season 3 will be exciting to watch as well. Many fans are expecting the third season to be more interesting than ever to watch on Netflix again.

Where To Watch Delhi Crime Season 3?

Delhi Crime is a Netflix original series, so you can watch it on Netflix. Take the subscription to Netflix and enjoy the series!

Also Read: – When Will MX Player Apharan Season 3 Will Be Out?

Season 3 is still not out. We will let you know once it is out. Till then enjoy the season 2 trailer.

Do you like this drama? Who is your favourite character? Which season do you find more interesting? Are you excited about season 3? Please share all your views in the comment box below.