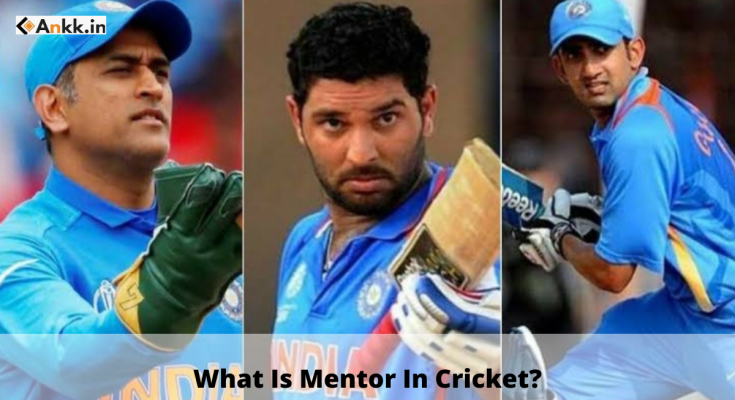 A mentor is not only someone who helps you in winning through tactics but in cricket, it is someone who helps you in winning the match not only through technicality but through mental support that inspires you to do more in life. A mentor is somebody that inspires you to fight the battle of life and emerge victorious in it. Unlike a Coach, a Mentor is someone who guides the team member to a goal. More than the tactics, a mentor helps the players from a motivational point of view. He/she also aids players in applying the skills that they have developed in the training.

So let’s dig deep into understanding what is mentor in cricket!

What Is Mentor In Cricket?

A mentor is a person who is appointed to a team due to his experience and expertise in the game of Cricket. The mission of Cricket Mentoring is to provide the players with the knowledge which they lack. A mentor helps the players to assist to achieve their goals. The role of Cricket mentoring is to provide cricketers with the information and resources necessary to help them realize their ambitions and objectives. To help you achieve success on whatever level you set your sights on, we will do all in our power to do so.

Are Coaching And Mentoring Similar?

A person receives help and guidance during learning to reach a particular personal or professional outcome or goal via the practice of coaching, which is a kind of developmental process.

Some Remarkable Mentors In Cricket History

Nearly one year into his retirement from international cricket from all formats of the game, MS Dhoni made a ‘special comeback’ that very few even imagined. The two-time World Cup-winning skipper was named as the mentor for team India for the T20 World Cup, on the heels of the team announcement by the BCCI.

Amre has worked personally with multiple Indian batters such as Ajinkya Rahane, Robin Uthappa and Suresh Raina to name a few, aiding them in tweaking their technical flaws to great effect. Amre was also highly credited with reviving the batting technique of Prithvi Shaw post a forgettable tour of Australia in 2020-21. Amre remains involved with the Delhi Capitals (DC) in the IPL as an assistant coach and carries a burgeoning reputation with him.

Warnie had a point, and the likes of Dimitri Mascarenhas and Shaun Udal have waxed lyrical about how his encouragement and backing made them better cricketers.

Viv Richards, the most intimidating batsman in history passed on his knowledge to West Indies’ next generation of batsmen.

An Edgbaston institution who sadly passed away in 2011, Abberley was an instrumental figure in the careers of countless Warwickshire cricketers – most notably Ian Bell – so much so that Bears skipper Jim Troughton dedicated the club’s 2012 Championship triumph to the former batting mentor.

A mentor is someone who assists players to aid them in achieving their aims. His position is very much important in cricket. So what are your thoughts on it? Share them in the comment section provided below.