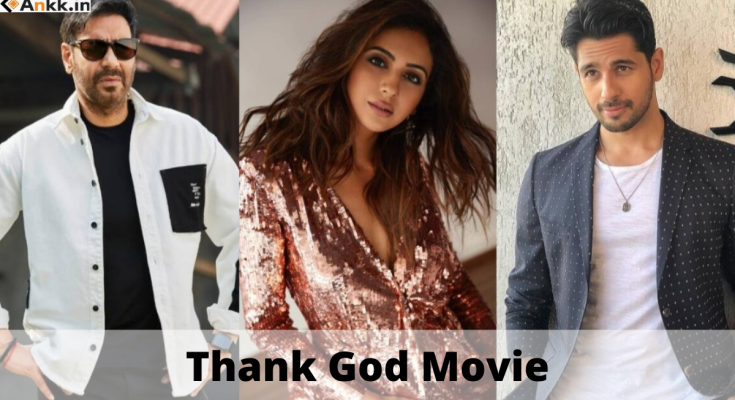 You might be having many desires which you can’t fulfill but with movies, you can live your imagination and travel into fairyland. Films offer everyone something Whether you are in a bad mood but with movies, you will always feel entertained. They offer us so many things: humour, romance, drama, action and a lot more

Upcoming Diwali one such movie is realising that will lift your mood. That is ” Thank God”. So let’s have a look at the movie cast, story and more.

Thank God is an upcoming Indian Hindi-language comedy film written and directed by Indra Kumar and produced by T-Series and Maruti International. The film features Ajay Devgn, Sidharth Malhotra and Rakul Preet Singh in the lead roles. The film is scheduled for release on 24 October 2022 on Diwali.

After working together on the 2019 comedy, Total Dhamaal, Ajay Devgn and Indra Kumar are reuniting on Thank God. It’s touted to be a one-off its kind comedy set in a fantasy world with Sidharth Malhotra and Rakul Preet Singh playing the two other leads.

Thank God has been delayed because of extensive VFX work. But now the official date this intense comedy movie is going to hit the big screen on 24 October 2022 coinciding with Diwali.

Thank God is a comedy movie about a few kind-hearted yet goofy men who want to reform society. They are blessed by God and decide to take matters into their own hands in order to bring about a change in society. They have a lot of antics that lead to chaos in the lives of the people around them.

Thank God the trailer is still not out. But it is going to be amazing because of the fantastic trio of Sidharth Malhotra, Rakul Preet Singh and Ajay Devgn. Also, we will update soon once the trailer is out.

Looking whether the star cast or director or producer, everyone who is attached to this film is phenomenal. So the Movie might be going to be a blockbuster, with a huge box office collection.

Also Read:- Gadar 2 Movie Release Date: Is The Magical Cinema Going To Be Back