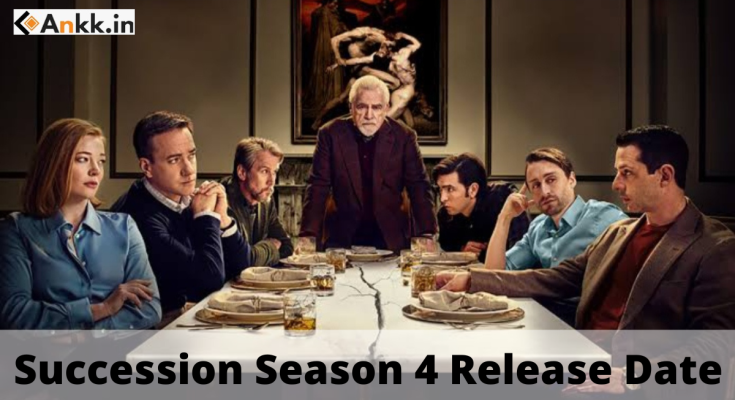 Succession is a satirical black comedy-drama. The series is widely applauded and had a massive fan following, people are going mad in the wait for its season 4. Succession is renewed for season 4 and the announcement was made official by the succession Twitter page on June 27, 2022. The show will probably film throughout summer and early fall, it can be speculated that Logan Roy and his family will be back on screen sometime by early 2023. So let’s have a look at what Season 4 going to look like!

The series premiered on HBO in 2018 for the first time. Succession- is a story about the Roy family who owns a global media and entertainment conglomerate Waystar RoyCo.

The head of the family, Logan Roy (Brian Cox) experiences a certain decline in his health which leads to his four fully adult children starting to prepare for a future without their father, and each of them to wants to take the charge in line of “succession”.The four children are- oldest son Connor (Alan Ruck), power-hungry Kendall (Jeremy Strong), irreverent Roman (Kieran Culkin), and politically savvy Shiv (Sarah Snook).

Season 4 production announcement was made on 27 June 2022 through social media. Since the production has just started, the show will not air until late this year. Season 4 is in the filming phase, we will inform you once the official release date for season 4 is out.

Logan decided to peruse the buyout deal for Waystar by Lukas Matsson. Logan also revisits his divorce agreement with his wife, Caroline Collingwood (Harriet Walter), which would strip them of any power or supermajority against him and override his plan. Instead of the Kendall vs Logan duo that fans are used to, season 4 will focus a great deal on the buying out of Waystar to Lukas Matsson. Logan is tired of his children not being able to partner with each other.

In season 1, after Logan suffers a stroke, Kendall attempts to take over complete control of the company. He tries to do so by attempting a vote of no confidence in his father’s leadership, and when that doesn’t work his next move is to attempt a hostile takeover. Later in the series, Kendall’s drunk driving kills a waiter at Shiv’s wedding and Logan tries to cover up the incident. Along with that, Logan also demands Kendall withdraw his support of the takeover bid.

The second season follows Kendall doing his father’s bidding, and Logan leads shiv to believe that she can be the next CEO. Later, when a string of sexual harassment and cover-ups at the company is revealed, Logan demands Kendall to take responsibility for the same, but instead, Kendall chooses to become and whistleblower and ends up publicly blaming Logan for the whole thing.

Then in the third season, Kendall can be seen attempting to wage a legal as well as public-opinion campaign against Logan’s leadership while also trying to maintain the family’s ownership of the company.

But along the way, he starts to lose focus and ignores advice from his lawyers and PR advisors which leads his campaign to lose momentum. Towards the end, Logan ends up selling the company while his children unite against him for the first time but fails to prevent the sale. So there is going to be a lot of drama in season 4.

The season 4 trailer is still not out. We will update you once it is out. Till then rewatch the season 3 trailer.

So this was all about Succession Season 4. Hope you enjoy reading. Please pin down all your thoughts in the comment box below.