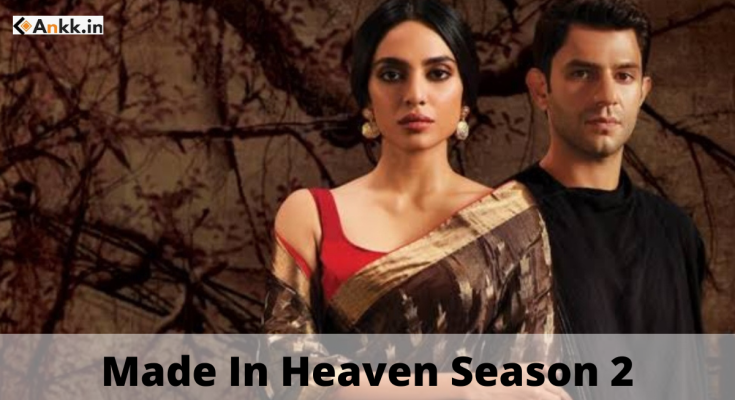 Made In Heaven is one of the most popular Indian web series to be made. Ever since the makers announced a second season, fans have been waiting with anticipation. Made In Heaven season 2 release is one of the much-anticipated returns on Amazon Prime Video coming in 2022. The fans are all ready to know the D-Day when they will watch Tara and Karan back on screen with newer and crazier Delhi weddings. So let’s quickly get lost in these crazy weddings!

Made In Heaven Season 2

The first season of this romantic web drama series was released on March 8, 2019. It premiered the 9 exciting seasons having a run-time of 45-60 minutes each. The acclaimed web series was produced by Zoya Akhtar and Reem Kagti’s production house Tiger Baby. After watching the success of its debut season, the makers of this most awaited web series decided to deliver its second season.

Made In Heaven Season 2 Cast

The cast of season 2 includes the following actors:

Made In Heaven Season 2 Story

Made In Heaven season 1 featured Tara Khanna, an ambitious woman who wants to be known for her own work rather than being called popular industrialist Adil Khanna’s wife. She, along with Karan Mehra, her gay friend, start a wedding planning business titled Made In Heaven. The show follows their journey of organising lavish and grand upper-class Delhi weddings that are not just crazy and fun but also reveal the real face of the relationships among the rich. All this while, they have their inner dilemmas and struggles to deal with as well.

Season 2 is expected to begin where it ended in season 1. Tara confessed about the video to Adil and ran away from the mansion with some jewellery. Karan reunited with Nawab, his past love and cleared the misunderstanding between them. Made In Heaven office was destroyed by activists against Karan’s homosexual status. In the new season. Made In Heaven is expected to see new beginnings featuring an international or a destination wedding. Anusha Dandekar will join the cast as a bride who makes a smashing entry on a horse at her wedding. We can also see new romances this season.

Made In Heaven Season 2 Release Date

The filming of this series commenced on March 2, 2021, and was set to wrap up in July 2021 but having irregularities in the shoot due to Covid-19 it couldn’t go as it was planned. Finally in December, last year the entire shoot of the series was wrapped up, after their France schedule. The series will have its premiere on OTT streaming giant Amazon Prime Video as it is the fourth original fictional Indian series on the platform. So let’s wait for the official date announcement.

Made In Heaven Season 2 Trailer

The trailer for season 2 is still not out. Till then you can rewatch the season 1 trailer. We will update you once the trailer is out.

So this was all about Made In Heaven Season 2. Hope you enjoy reading. Please pin down all your thoughts in the comment box below.