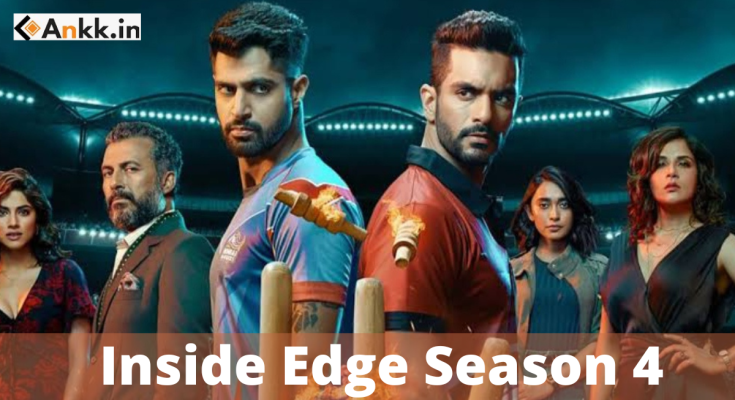 Cricket is the most followed game in India so is Inside Edge an Indian sports series on Amazon prime. It is created by Karan Anshuman, it follows the story of Mumbai Mavericks, a T20 cricket team in the PowerPlay League, and shows the men who run the league for money and power.

It reveals the wrongful doers and their illegal actions in the sports industries, which appears glamorous from the inside but inside it follows the game of money and power. It also tells how politics and money shape the Indian sports industry.

The first season of the show premiered on July 10, 2017, was widely acclaimed, and even received an International Emmy nomination. Its unique combination of Indian sports with drama and thriller really makes it stand out. It has a huge fanbase and its fans are eagerly waiting for Inside Edge Season 4. So let’s dig into Inside Edge Season 4 information.

Inside Edge is an Indian sports drama on Amazon prime. It was released in July 2017. The second and third seasons premiered on December 6, 2019, and December 3, 2021, respectively. This series has gained a massive audience which made it nominated for Best Drama Series at Emmy Awards.

So its fans are eagerly waiting for Season 4. Season 3 was left on a few cliffhangers. However, an official announcement awaits. The series’ central theme is the Mumbai Mavericks, a fictional T20 cricket team, whose owners are operating a league-wide spot-fixing syndicate.

The series is produced jointly by Ritesh Sidhwani and Farhan Akhtar and created by Karan Anshuman. It has various big faces on it.

In Season 4 you may see the following cast :

Aamir Bashir’s character, Yashvardhan Patil/Bhaisaab, may not return as their story almost ended in season three. We can also few new faces as well as old faces in this fabulous series.

Inside edge Season 3 was launched on Amazon Prime on December 3, 2021. It has a total of 10 episodes in total. Season 4 is widely anticipated. However, there is no official confirmation on season 4. Farhan Akhtar, the program’s executive producer, took into notice the fan’s desire to see more of the show and its plot in November 2021, ahead of the premiere of season 3.

Season 3 story was left on cliffhangers, and many questions needs. So there might be a season 4 to continue the story. Season 4 might be released in the fourth quarter of 2022 or the first quarter of 2023. So let’s wait for the official news.

At the end of the third season, Vayu is imprisoned after India defeats Pakistan in the final game. In the meantime, Zarina was elected Chairman of the Indian Cricket Board, saying it was required. She warned the council members that if they did not obey his directives, they would suffer the consequences. After that, he immediately removed officials beyond the age of 70, as recommended by the Roy Commission. Vikrant was arrested by the EBI after that Mantra secures a betting license from the authorities with the help of Zarina.

So in the fourth season, we might notice how Zarina will become the new mastermind and how Vikrant will fight for his position back. And the rise of Mantra. So Season 4 might come back with a lot of twists.

There is no official trailer for season 4, but might be released soon. We will update you once it is out till then you can enjoy the season 3 trailer.

Are you a Cricket freak? Do you like the Inside Edge series? Are you excited for Season 4?