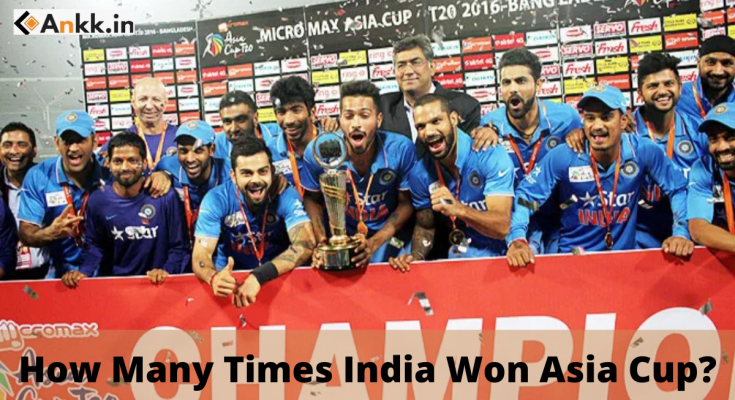 The Asia Cup 2022 is the most trending topic right now, and now many people want to know how many times have India won the cricket Asia Cup. Recently India begin its Asia Cup title defense against Pakistan on August 28 at the Dubai International Stadium in Dubai. India turns out to be victorious after that all eyes are on Asia Cup 2022.

The Asia Cup is one of the most prestigious cricket competitions on the continent. It has been hosted regularly since the inaugural edition, which too, was held in the United Arab Emirates in 1984. The format of the Asia Cup mirrors the ICC tournament it precedes. So let’s have a look at Indian history in Asia Cup.

How Many Times has India Won Asia Cup?

Team India has won the Asia Cup on seven occasions and is the most successful team in the competition’s history. So let’s have a look at the past 14 editions of the Asia Cup:

Highlights Of The Asia Cup Won By India

Let’s have a look at the tremendous seven victories of India in the Asia Cup.

India emerged as the winner with Sri Lanka as the runner-up. Wicketkeeper-batter Surinder Khanna emerged as the unexpected star winning the man of the series award after he slammed back-to-back half-centuries against Sri Lanka and Pakistan.

India was the winner with Sri Lanka as the runner-up. Sri Lanka failed to post a challenging total after losing four prime wickets to run outs and a score of 176 was made to look pretty easy by the man of the series Navjot Singh Sidhu’s rapid 76 scored off 87 balls which saw India win by nearly 13 overs to spare.

India hosted the Asia Cup for the first time and won it for the third time defeating Sri Lanka in the final played at Calcutta by seven wickets. After losing the league game to Sri Lanka by 36 runs, they hit back hard to win the final largely due to a hat-trick by Kapil Dev who dismissed Roshan Mahanama, Sanath Jayasuriya and Rumesh Ratnayake in his sixth and seventh overs.

India won the Asia Cup for the fourth time in as many attempts. India, Sri Lanka and Pakistan were tied on points after the preliminary round, but the first two teams qualified by a better run rate. In the preliminary round, India posted a big partnership when Manoj Prabhakar (60) and Sachin Tendulkar (112 not out) contributed 161, the highest opening partnership in Sharjah and against Sri Lanka at that time.

Sri Lanka topped the qualifying table, but India came up with an excellent all-round performance in the final and win the Asia Cup. India was the most impressive side in the tournament, even though none of their players topped the batting and bowling charts.

India played like a champion side all through the tournament, winning all their matches. They started their campaign against the hosts, beating Bangladesh comfortably by 45 runs. India sealed a place in the final by beating Sri Lanka by five wickets as Kohli once again played an important role in the win stroking 56 not out. India lost Rohit Sharma early, but Shikhar Dhawan stayed on and put on 94 runs for the second wicket. With 19 runs required off two overs, the crowd were behind the home side, but M S Dhoni finished the game before the 14th over ended, hitting Al-Amin for one four and two massive sixes. The second six gave India their sixth trophy in the Asia Cup.

Indian batters scored a fifty, but there were many useful contributions keeping India in the game. India needed six runs off the last over, with Kedar Jadhav and Kuldeep Yadav at the crease. It boiled down to two off the last two balls and then one off one. Jadhav missed putting a bat to the ball but managed to scamper for a leg-bye that gave India their seventh Asia Cup triumph.

In India the most loved game is cricket, people love cricket and especially the Asia Cup. So what are your views on Asia Cup? Are you enjoying the Asia Cup 2022?