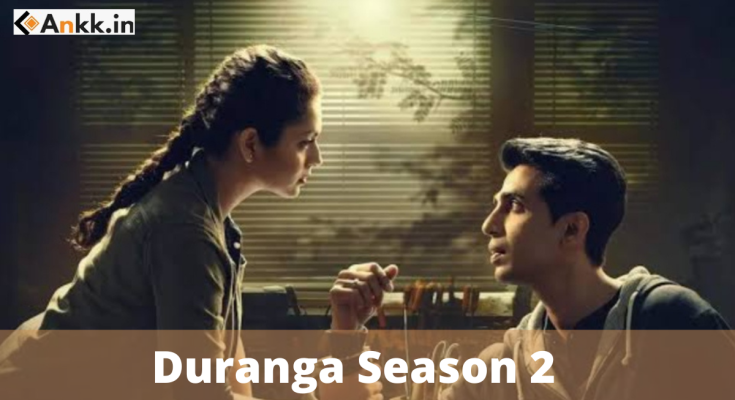 Many series are made as an adaptation of some foreign web series, but a few can carve a special place in the audience’s heart. One such series that truly stand out was Duranga. In just a day, Duranga attracted a large audience and viewers are anticipating it to be a huge hit across the OTT. Its season 1 was widely acclaimed and received so much love and now its fans want to know whether there is going to be a part two of this series. Let’s find out!

Duranga is a Zee5 Original Series that was released On Zee5 on the 19th of August. This series was an official Adaptation of a Hollywood Korean Web series Flower of Evil, This Korean Show Is Available For 1 season An MX player in Hindi is dubbed. The first season of the Web series Duranga is considered a good crime thriller. Drashti Dhami nailed it as the A Character of a Police Officer, and Gulshan Devasish gave his best performance thus far.

Duranga debuted on Zee5 on August 19. In just one day Duranga achieved great Viewership. Now people wanted to know whether there is going to be a season 2 or not. Though the season 1 story was left on a cliffhanger so there might be a season 2. There is no official confirmation regarding it, we will inform you once it is out.

It is the love story of Sammit (Gulshan Devaiah) and Ira (Drashti Dhami) that unfolds in three different timelines. Sammit portrays two different sides of a character. Hiding a twisted past, Sammit maintains a facade of a perfect man, father, and husband.

A sculptor as well as expert chef, Sammit Patel (Gulshan Devaiah) is a loving husband to an ace cop, Ira Jaykar Patel (Drashti Dhami) and a doting father to little Anya (Hera Mishra). Sammit’s parents, Dr Manohar (Rajesh Khattar) and Anupriya Patel (Divya Seth), frown on his choice of wife and are hostile to even the moppet. A couple of murders and their similarities to some 17-year-old serial killings of women near Goa lead the cops, that is Ira and colleague Nikhil (Kiran Srinivas), to the past, where Bala Banne (Zakir Hussain) was accused of killing multiple women and part-mutilating their bodies. Since then, Abhishek Banne, his son, has gone missing and Bala has committed suicide.

As events unfold, it becomes very clear that Sammit is not who he is on the surface. He has of course confessed to Ira that he has a past, but Ira loves him unconditionally and decides to marry him so that she will protect him from the ‘ghosts’ of the past! So is Sammit actually Abhishek Banne? And what happened to Abhishek’s sister Prachi, who must be 17 years older now? Finally, the police home in on a possible accomplice of Bala Banne, who might be one of these, or someone else.

The cast of season 2 is not yet finalised so let’s have a look at season 1 cast:

Also Read: – Maharani Season 3: Another Round Of Political Drama All Information